Part Two: Phenomenology and Photography in a Study in Spectrality and Life After Death

Spirit Photography and the Victorian Era

The Mumler’s and other such spiritualists in the late 1800’s sought to provide loved ones with images of their deceased relatives, or rather a deceased someone as many did not recognize the dead, for a price. Death was an ever-present theme in many aspects of life and art, and spirit photography was very much a theme of death, more to the point, life after death (Merian, 2015). There are many schools of thought on the idea, but even experts during the day sent to investigate his photos came away as believers in his work. The police attempted to charge with Mumler with fraud and they too failed to prove their case, though the mere dragging of the case through the nationally seen Haper’s Weekly caused enough of a stir to effectively end his spirit photography career (Star, 2015).

Whether using trickery, design or “gift,” the use of color, space, value and texture all play a role in spirit photography. For most photos during this period, the sitters are photographed in a portrait manner. Usually, they are seated and taking a formal photograph done in the portraiture style. With the images of the ghosts seen behind the sitters in the photo, or sometimes superimposed over the people sitting for the portrait using space to further the images of souls from beyond the veil. What makes this unique in the case of Mary Todd Lincoln, is the use of space to show not only depth to where Lincoln stands behind his wife but also of his hands on her shoulders. The use of color, or rather lack of color, in the images embeds the image of the specter as non-corporeal. In a double exposed image, the images of previous people in photographs are sometimes still faintly visible, and thus a ghostly apparition was formed. What of Lincoln? There would have to be a photographic negative with a previously exposed photograph of the president. At the time, and still debated and not solved, is that Mary believed it was her husband, she maintained that she was incognito and had to be talked into the taking of the portrait (Star, 2015). It was said to have given Mary lots of comfort in her later years (Star, 2015).

The artist was striving for people to believe that he has caught the dead coming back to comfort the living. The idea of photography as science held that if seen, it was believed. With the advent of double exposures and spirit photography, the frauds found a ready medium they would use to their advantage. Or did they, the belief was widely held that the images were of double-exposed photographs, but what of the scientific conditions in which he was tested by photography officials? After his brush with the police not being able to prove his fraud and deception, Mumler gloated in later pamphlet’s that he wrote that he was creating genuine spirit photographs and the proof was seen in the lens of his camera. In the past years, spirit and psychic photography remain hotly debated works of photographic evidence of life beyond death. 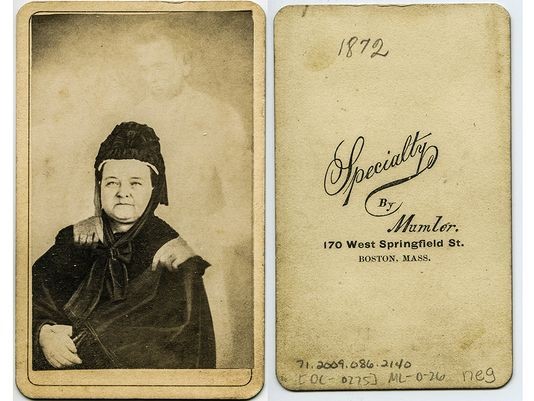