Phenomenology in Historic Photography: A Study in Spectrality and Life After Death, Part One of a Series

The camera is the tool of the skeptic and believer alike in the field of spectrality and photography. Spiritualism, occultism and paranormal research have all amassed a wealth of photographic spectral evidence bringing to light the ever-present question; what happens when we die? Spiritualists have used spirit photography to make money and sell peace of mind to a mourning nation. Artists have used art and photography to examine the questions of fear and mortality, ghosts and illusion in a postmodernist examination of life after death (Marien, 2015). Paranormal researchers see evidence gathering at staggering rates, and with the advent of new technology such as smartphones and digital photography, and equipment designed to speak to the dead, science is closer to making definitive strides forward in our knowledge of the afterlife. With the nature of photography and editability, the question of the camera lying is one that only gets harder and harder to distinguish. After all, is it the camera lying, the artist, our senses or is it our need to believe in something; anything. This work will examine the questions of life after death and spectrality. Artists for centuries have used the mediums on hand to help explain complex issues that face us socially, culturally, emotionally and physically with the deepest and perhaps darkest question being; what happens to the soul after death? Humanity struggles with the questions of mortality to garner a deeper understanding of what makes the intersection of spirituality, death, art and photography so compelling; photographs are both the evidence and the deception in our quest to find out what happens to our consciousness, our soul, after death.

This exhibit will look not only at the phenomena of spectrality but also the use of the camera to aid in the proving or disproving of life after death. Beginning with the late 19th Century Spiritualists photos, such as the famous Lincoln spectral photograph, will look at the daguerreotype process. Photos will include a photograph by Mumler of Mary Todd Lincoln and her late husband; President Lincoln will be examined. Photos of this ilk display the drive behind the masses seeking spectral evidence that their loved ones were still with them (The Getty). In these photographs, we are witnessing the marvels of spirit photography and what was, and still is, a heated debate regarding the existence of spirit after death. In the fascination humans have with death there is a fear that seems to drive us to discover the unanswered question of what happens to the soul at the time of the body’s death (Merian, 2015). In a period when many suffered losses from diseases and fatalities on the battlefield in many great wars, the Civil War many sought the comfort of spiritualists, and some of those spiritualists tried the medium of photography to gain acceptance for their claims (Merian, 2015). One such famous photographer was William H. Mumler, who with the help of his wife, a well-renowned medium and healer herself, developed his art of spirit photography (Star, 2015). Whether a trick of double exposure or the real thing, many will simply not know, but artists such as Euegène Thièbault will show that the medium is by far easily manipulated and the public just as easily defrauded.

During the birth of the postmodern era of the 1930’s photographers caught the spectral image of the Dead soldiers showing up in regiment photos taken in the field after death. The Brown Lady of Raynham Hall was caught by Country Life photographers using a 35 mm and a portable camera spark further debates; others dappled in the artistic renderings of death and spectrality and works of art depicting spectral images and paranormal themes (Townsend, 1952). The book examines work at the spiritual core of Van Der Zee’s collection, Tramz refers to it as a meditation on life and death, and it’s beauty, sadly it is out of print, but it resides in many libraries (Tramz, 2014). These funerary portraits were quite popular for families to memorialize their dead and Van der Zee captures the yearning questions concerning what awaits the soul after death and the hopes of conveying that belief through art and photography. From there the exhibit will look at the modern-day phenomenon of ghost hunting and spirits caught on tape thanks to the advent of new technologies, tourists are capturing spirits on their smartphones as well as respected researchers. What does this tell us about life and death and our fascination with answering the question of what happens to our souls after death, is it a matter of spirituality, philosophy or is it merely art; or is it worse and something nefarious in nature? Are these real spectral phenomena, examples of fraud or merely pareidolia?

This exhibit seeks to look at the role that the camera plays in this most basic of quests of humankind. The camera has become the tool of the believer and the skeptic alike; does the camera lie, does the mind seek out patterns, or does the camera merely show a canvas waiting for our interpretation? Life and death, art and truth, beauty and fear; these are the things that the concept of death conjure in mind, what we make of such spectrality remains to be seen. This exhibit will examine the role of photography in the quest for the answers to our mortality and our soul; humanity is seeking the elusive deeper understanding of the boundaries between spirituality, death, art, spectrality and photography. 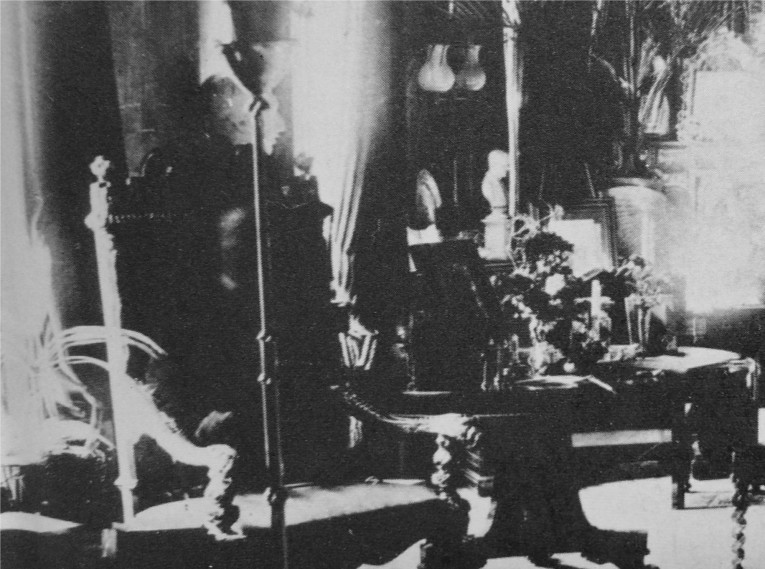